I have visited the most important monument of Cordoba several times: on my own and also as a escort guide. Of course, I would not say I am an expert, but this is the monument that I have visited more times than any other out of Seville and I have read a lot about it. The mosque of Cordoba is one of my passions.

For those visiting the monument for the first time I usually recommend this guide because I think it is a good introduction and also point other highlights of the city. It is a touristic guide, so do not expect massive information. However, it is bit different from the official version so, of course, a bit different to the leaflet given by the Cathedral in the entrance. Please note that there is a new leaflet now, so I in this post I am always talking about of the old one. In the new one, at least, the tittle is “Monumental Site of the Mosque-Cathedral of Cordoba”.

The thing is that everybody goes to see the Mosque of Cordoba, but it is also an active Catholic Cathedral and some local groups defend the duality Mosque-Cathedral as a monument. This is a big deal in the city and also in Andalusia. Lot of opinions and arguments disclose the different economical, social, politic and cultural interests from different sectors.

So, before continuing reading let me say it clear: This is a post about the Mosque of Cordoba or, at least, about the mosque we can still appreciate. As Robin Yassin-Kassab wrote:

“Of course, it’s not a mosque anymore. You have to pay to enter, a distressing eight euros, (now the price is 10 euros) which change the nature of the visit. You have to treat it like a museum and see all you can in one go. […] Nobody is sitting or prostrating or snoozing on the floor. Parts of the space are cluttered by pews. Sentimental, sometimes garish paintings (one of a Christian conqueror receiving obeisance from kneeling Muslims) hang on walls and in alcoves. […]Still you can imagine how it used to be.” *

It is possible to enter to the orange trees courtyard (or patio) through different gates, but the main entrance during Al-Andalus period was the door of the forgiveness. After the Christian conquest the orientation of the temple was changed and the main entrance of the Mosque became the exit of the Cathedral, which is normally called the door of the forgiveness. The present bell tower is attached to that door, and this tower covers the original minaret built by Abderrahman III. According to the conserved drawings from previous periods, the minaret looked like this:

This courtyard was the sahn or ablutions patio, so there is a main fountain, and other secondary fountains too, were Muslims washed their hands, face and feet before going inside of the Mosque to pray . The vegetation is mainly compound by orange trees, and there are also some cypresses, but what I really like here is the irrigation system for all them. “Acequia” is a word in Spanish that comes from Arab and it refers to the small canals on the floor that connect all trees and plants. With no electricity at all, they could irrigate everything in just a moment. 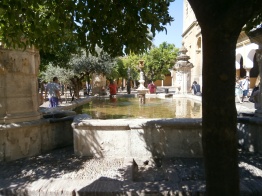 Naves of Abderrahman I

The first time I put my feet in this large gallery of arches I felt like there was no end, for me it was a boundless space. I have seen a lot of pictures of the arches before, but they were not like the reality. Totally surprised and dumbfounded I started to walk among the big groups looking to my left, right, above, below…everywhere.

Very soon I saw under my feet the ruins of Saint Vicente Basilica. I do not want to reduce the importance of those ruins, but they are just a small piece of a floor and they were marked in the old leaflet of the Cathedral as if they were more important than the mihrab, for example. Anyway, according to their leaflet this basilica “was destroyed during the Islamic period in order to build the subsequent Mosque”, while in the guide that I recommended above it is said “711: The Visigoths give half of the Basilica of San Vicente to the Arab conquerors. 785: Abd ar-Rahman I buys the Basilica of San Vicente to build a Mosque”. Here we have two different ways to tell a historical event.

In conclusion, since the beginning of the text, the Cathedral explains to us that the Islamic Andalusian culture was a civilization who loves to destroy previous Christian basilicas and who did not create anything original, everything was due to the hispanic-roman influence (recently the bishop from Cordoba said it is just byzantine influence).

Anyway, Abderrahman was inspired by the Mosque of Damascus, probably because his family was from that city, the Omeya dinasty. Even more, the orientation was towards the South and not towards La Meca probably because of that reason too.

Expansion by Abderrahman the second

Abderrahman II was the grand son of Abderrahman I, not the son, and he ordered to make this expansion of the Mosque because of the increase of population in Cordoba. It was necessary a bigger haram (oratory) specially on Friday. This emir respected the original appearance with the arches compound by brick and stone of red and beige colors. 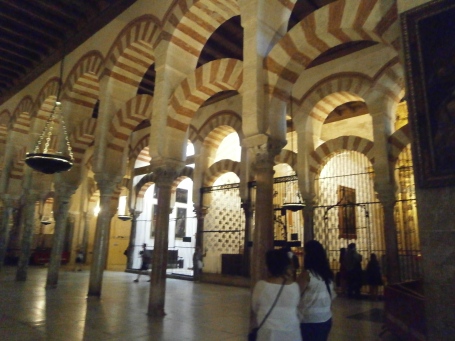 Al Hakam II was the grand grand son of Abderrahman II, and the second caliph of Cordoba. His father, Abderrahman III declared the independence of Damascus and himself as the Caliph of Cordoba. So during the reign of Al Hakam II, Cordoba was the capital of the most advanced civilization in the Mediterranean area. His expansion of the Mosque is the most beautiful part in my opinion. He was a man very well versed in several sciences and his large interest in knowledge made him create the bigger library of his time. It is calculated it was compounded by 400.000 books. He had a refined taste that can be appreciated not only in the Mosque, but in the ruins of Medina Azahara, the Shining City.

The present qibla and mihrab are also from this expansion. They are full of small details, mosaics, geometrical figures, Arab calligraphy, verses from Qoran in golden letters… In every tiny corner and square centimeter lies the highest beauty. The splendour of the Omeyan dinasty is in this part of the Mosque. If my mouth was open in the beginning of the visit, at this moment I could be with a couple of tears in my eyes. 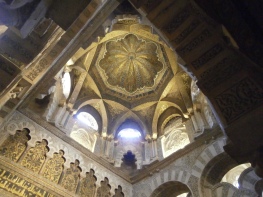 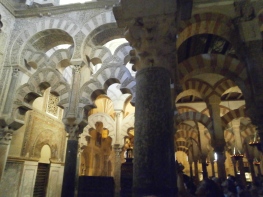 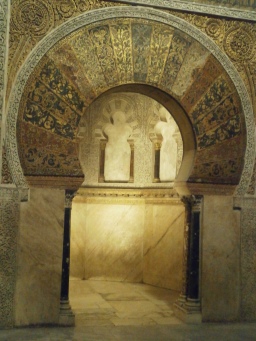 This part is called “naves” and not “expansion” probably because it is almost bigger than the other three parts together. Al Mansur (or Almanzor) was a very powerful man but he was not the Caliph. He was the ruler de facto. The sudden death of Al Hakim II made his young son Hisham II to heritage the throne when he was only 12. Al Mansur became the manager of the Caliphate while he isolated the young Hisham II in the city of Medina Azahara. Totally different to the previous caliph Al Hakam II, Al Mansur was not a man of sciences and arts, he was a politician and a warrior and a he started a big military campaign towards the Christian kingdoms in the north of the Peninsula. He even took the bells from Santiago de Compostela Cathedral and they were hang in the ceiling of the Mosque.

The population of Cordoba at that moment was extremely high, around 500.000 inhabitants and this is reason enough to this enormous expansion, but it is also said that Al Mansur wanted to show off the power he had. This part of the Mosque makes the mihrab and the main entrance in the courtyard not being in the middle of the structure. That is the reason why the mihrab is off-centre. Apart from that, it is very easy to recognize the part built by Al Mansur because the floor is red and not white, while the colors of the arches are not the natural colors of the stone, the arches were dyed in red. These elements made this part of the Mosque a little bit less refined; it is a section more rough where the size is the most important element.

The construction of the different Christian chapels inside of the Mosque started after the conquest by Ferdinand the third of Castilla (1236). The main chapel is exactly in the middle of the prayer room, and there is a big chapel, where the Corpus Christi is exposed to the visitors, next to the mihrab. I do not want to disregard the artistic value of these chapels, but even the emperor Charles V said “you have destroyed something unique in the world to build something we can see everywhere”.

Even more, the Cathedral permits to work in the Mosque as a guide only to a certain number of official guides in Cordoba. In that way they control the speech transmitted to the visitors. When I go as an escort guide there is always a moment when the official guide have to say “In my opinion, the Cathedral saved the Mosque” when talking about the different restorations done in the monument. I am not going to talk about the money from the public administrations invested in cultural restorations.

But yes, the Cathedral saved the Mosque. I have heard those words every time.

Following now the words by Robin Yassin-Kassab “I’m not going to whine about the Christianising of the mosque in Cordoba or lament the larger defeat of Islam in Andalusia. Powers and civilisations, and religious too in their organised manifestations, rise and fall. […] But still, there’s something wrong here, purely from an aesthetic and cultural point of view. If you walk half a way over the Puente Romano and look back to the Mezquita you see what it is. The building’s basic elongated structure is that a mosque which has been violated by a cathedral, as if the cathedral has landed from the air, like a bomb. The cathedral is too heavy. It crushes and ruins the mosque. This isn’t fusion but vandalism. It looks like an insult. From inside too.” * 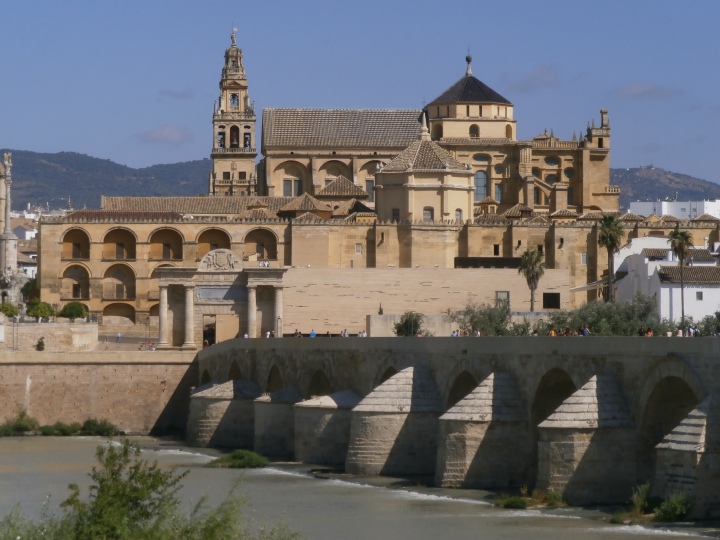 Oh, the ever flowing waters of Guadalquivir

*Note: Paragraphs and poem from the chapter “The Jasmine Breeze” by Robin Yassin-Kassab from “Critical Muslim: Reclaiming Al-Andalus”, that I mentioned before in the article “The Original Enlightenment”

7 thoughts on “The Mosque of Cordoba”