The White Towns Route (Ruta de los Pueblos Blancos) is becoming famous among visitors and travelers as it is considered one of the best additions to an Andalusian tour. The white villages are a series of towns in the provinces of Cadiz and Malaga, most of them within the Natural Park Sierra de Grazalema. The name of the route is due to the white color of the houses. They are painted with whitewashed, a traditional material in Andalusia to maintain the inside fresher in the summer and to prevent insects going inside of the home.

Arcos de la Frontera is commonly the first place to visit in the route. It is not in the highest mountains of the province, its elevation is only 185 meters (607 ft), and it is the closest one to bigger cities like Jerez and Cadiz, very well connected to them by a highway. When arriving to Arcos the most impressive thing is the view of its famous cliff. Arcos is situated on a rocky limestone ridge with a sheer face that plunges down into the valley below. 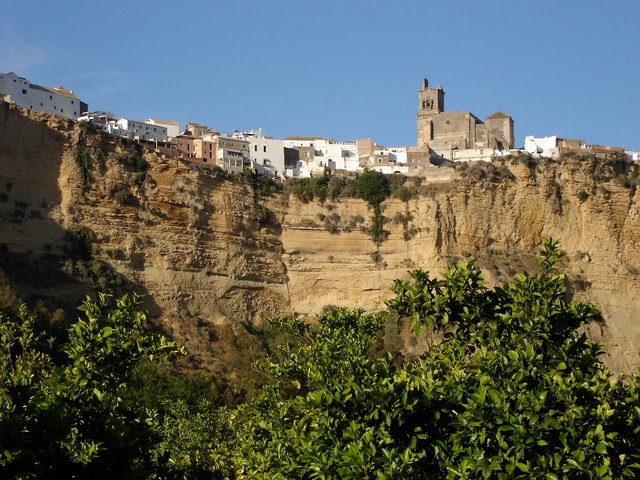 On one hand, the name of the town “Arcos” comes from Roman period from the latin words Arx-Arcis which means “fortress in high”. On the other hand, towns with “la frontera” in their names were in the front line between different kingdoms in the Middle Age. For example, Arcos in the 11th century it was even the capital of its own Taifa kingdom ruled by Bem Jazrum from 1012-1069, but then it was absorbed into the Taifa of Seville and later into the Taifa of Granada. It was in the 13th century when the Christian King Alfonso X conquered the town and Arcos started to be part of the kingdom of Castilla.

When the Castillian conquest finished, Alfonso gave the town to the family Ponce de Leon and they received the title of Dukes of Arcos. They started to live in the alcazar, rebuilt as a castle in the 15th century, and this is from where we start our walk in Arcos. The family Ponce de Leon was living in the castle until the 18th century. It was going to be demolished at the beginning of the 20th century, but an English family bought it and nowadays their descendants live there. It is difficult to visit because it is their home, so it is necessary to organize a previous arrangement with them. In google view we can see Cabildo Square, where the castle is behind the City Hall and next to it the church Santa María de la Asunción, built in gothic-mudejar style. If we continue moving the screen to the right we will see the Parador Hotel, from whose terrace we can enjoy beautiful views of the cliff and the river Guadalete. If we do not want to go to this hotel we can also have a look in from the balcony of Arcos, also in Cabildo Square. 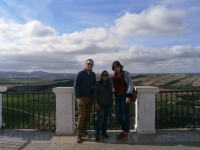 Sam, Pilar and Sara in the balcony of Arcos

From the terrace of the Parador

After being in Cabildo Square we can continue our visit along Escribano St. In the way we will enjoy our walk among bucolic narrow streets. Before arriving to Plaza Boticas there is a convent where we can buy delicious traditional sweets made by the cloister nuns of the religious order Mercedarias Descalzas (Discalced Mercenaries). We can seat down in Boticas Square and order a coffee in the bar to taste the sweets.

Once we are full of energy we can continue our walk to Olivares St. and then Maldonado St where there is an artistic nativity scene. The plastic representation of the birth of Jesus Christ is a very deep tradition in Andalusia, where there is a lot of cultural associations of belenistas or people who like to recreate the Nativity. This one in Arcos is just impressive, they even simulate the sunrise and sunset with changes in the illumination.

Please, do not forget to leave a donation before you leave the place. ☺

Once we are out we continue walking until San Pedro church with it beautiful baroque façade. From the balcony of Arcos or from the Parador hotel we have seen this church before. It was the rival church of Santa María de la Asunción Church. Their rivalry became so fierce that even in San Pedro church the priest forbid to say “Mary” during the mass. In substitution he said “Saint Peter, Mother of God”.

Very close to this church, in Nuñez del Prado St. there is one of the main centers of local life: Casa de la Cultura (House of the Culture), which is a cultural institution in Mayorazgo Palace, an old palace built in the 17th century. A bar and the pensioners association are also there. We can see some lovely patios and gardens and to visit a small museum of old printing houses. 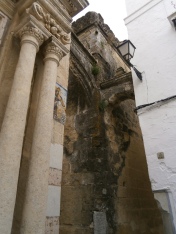 Time; The visit to Arcos can be very short, 2 or 3 hours. So we can continue driving to other White Towns like Zahara de la Sierra, Grazalema, Olvera or Setenil de las Bodegas, depending on how we have arranged our plans, but I think in a day it is possible to visit 3 of them. Food; In case we need a place to have lunch in Arcos I would recommend “La Carcel”. Parking; The times I have been to Arcos I have parked in Cabildo Square or in Corredera St. In both cases it is necessary to pay, but it is very complicated to find a free parking place in Arcos close to the old town.

My favorite detail in Arcos

Arcos de la frontera/ the town above /the river below. In old rock / new lizard. The blue dog of its river/lying at the feet of its owner