I’ve been to Carmona once. It was for a weekend in October 2014, almost 3 years ago. Luckily I wrote in a notebook lot of quotes about my experience so now I can write this post. We decided to visit it because it is very close to where I live, only 30 minutes driving from home, and I thought it could be a good destiny for a short break. Its emblem is “Carmona, the bright star of Europe” because it is one of the oldest towns in the continent.

We stayed in Alcazar de la Reina Hotel, which is a perfect option. It is a 4 stars hotel but not expensive and even more it is a historical building: It was the Alcazar of Cordoba Gates and the most beautiful area is the typical Andalusian patio in the center. 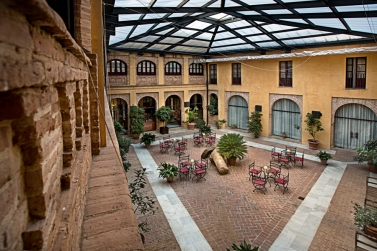 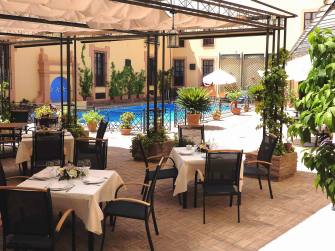 In Carmona there are many things to see and the guided tours offered in the tourist office are very helpful. They are completely free except for the entrance fees to the different monuments. It is necessary to book them in advance via their website. If you prefer to go on your own, they also uploaded a very complete tourist guide in pdf.

We did the basic tour the first morning. We started in Puerta Sevilla. This is a defensive gate and fortress from the 14th century, but it also conserves the gate from Roman period. We could climb it to take some pictures of the views.

Puerta Sevilla from the roof

In the guided tour you can decide whether to visit the inside of the monuments or not and I remember there were a few churches in the way, for example San Bartolome, that we didn’t visit because we don’t like churches so much and I thought visiting one was enough. Anyway, Santa María church, built on the site of the old main Mosque, is not included, so we could only took pictures from outside. Apart from that, it was very nice to see the convent of Santa Clara and smell the delicious aroma of their sweets while they were cooking. 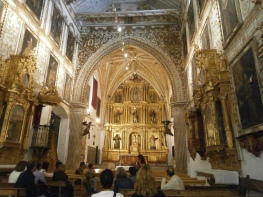 Chapel of the convent

Tiles and virgin in the cloister 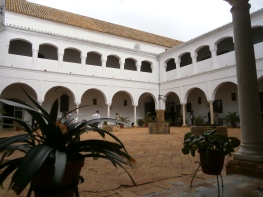 Me in the cloister

The second day we did one more guided tour, this time in an electric bus whose driver is also the guide. There is no website of this company, but in Carmona you will see him driving around all the time. The day before I listened to him in English explaining the historical fights of the farm laborers against land owners and he touched my heart because he focused in the surviving and starvation of local people.

I don’t regret having paid for this tour at all. We started at the Alcazar of the king Peter the First, that nowadays is a Parador Hotel. This king was also called the Cruel or the Just. Our guide said he preferred to say the Just because he was a king who supported the peasants, while the nickname of “the Just” was given by the rest of the aristocratic families that wanted to conquer the throne. Actually, Peter the First was killed by his bastard brother Enrique de Trastamara, a member of the powerful family Guzman.

Me in the patio

Close to El Parador is Santiago church, built during the kingdom of Peter the First, and Puerta de Córdoba. He took us till there to make us see the only bridge from the Roman period in the province of Seville. It is very small, but it is a part of the famous Via Augusta that connected the old Betica (Andalusia) directly with Rome. Once there he also explained us the importance of the river Guadalquivir and its meadow, because still nowadays the most important industry in Carmona, and in Andalusia in general, is the agriculture.

What I liked most about this tour was the visit to the neighborhood of San Felipe, where like many other neighborhoods in Andalusia it bears the name of the main church. San Felipe church was probably a Mosque too. The neighborhood has what we call “casas palacio”. These palaces were the houses of noble families and high bourgeois. But there were also very narrow streets typical in neighborhoods for working class people, and I still don’t know how he could drive the electric bus around there. I enjoyed so much this beautiful neighborhood and the explanations of the guide that we did not take any pictures of this area!

The big surprise was when he stopped the bus to make us visit the house of one of his neighbors! She was an old lady who opened the doors of her house to show us the typical structure of a casa patio: a courtyard in the entrance full of plants and flowers to have a fresh air in the summer, and the rooms organized around the central patio with a fountain. It was like being at my grandmother’s house. Again, it was so nice that we didn’t take pictures. Finally, we made a similar itinerary to the one we did the day before in the walking tour and we finished in San Fernando square, the main square in town. I made sure my guide knew this electric bus tour was the best experience in our trip to Carmona.

In the afternoons, we went on our own to closer ares to our hotel like San Blas neighborhood, the old Jewish quarter, which is a peaceful place to walk. An important thing we missed was the Necropolis, but as I said in previous posts my husband and I are very slow travelers and we can do a day trip to Carmona any time we want. Something that I will do for sure.

El Tabanco: We also enjoyed the restaurant of our hotel and we ate there sometimes. They offer very good tapas in a very relax atmosphere, probably that is the reason why locals like this restaurant too.

Bar Goya: This is more popular among locals and five minutes after we arrived the bar was overcrowded. The waiter was very nice and gentleman and he asked as for forgiveness because of the time we were waiting for our food. They also invited us to a dessert. It is located on the ground floor of a building from 15th century whose façade is decorated with splendid mudejar style.

El Molino de la Romera, an old mill from the Al-Andalus time. Rural decoration and familiar atmosphere. This is where we tried the famous local dish alboronía, cooked with vegetables and tomato soup. 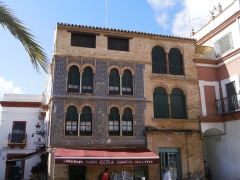