“En un lugar de La Mancha…” (Somewhere in La Mancha) are the first words of the worldwide famous novel “Don Quijote” by Miguel de Cervantes. It took me almost a year to read it and I thought it was the best novel I’ve ever read and probably the best book.

Here I bring a synopsis of its content: “The story follows the adventures of a hidalgo who reads so many chivalric romances that he loses his sanity and decides to set out to revive chivalry, undo wrongs, and bring justice to the world, under the name Don Quixote de la Mancha. He recruits a simple farmer, Sancho Panza, as his squire, who often employs a unique, earthy wit in dealing with Don Quixote’s rhetorical orations on antiquated knighthood.”

In the prologue of Don Quijote, Miguel de Cervantes excuses himself in case the readers think the novel is not as good as they expected. He says he wrote it while in jail: “So, what could a sterile and ill-cultivated talent such as mine engender, if not the story of a dry, shriveled-up, unpredictable child, who was filled with thoughts never-before imagined by anyone else—such a book as one might dream up while in jail, where all discomfort is to be found, and where all lugubrious sounds dwell?

Probably Cervantes is talking about the prison existed in Seville in the 17th century. In this city, he was a tax collector. The legend says he collected part of these taxes for his own pocket, but actually he trusted a Sevillian banker to deposit the money. But the banker went bankrupt and Cervantes’ accounts with the Crown were left unpaid. He was arrested and thrown in jail. Nowadays, there is an statue in his honor where the Royal Prison of Seville was. In his left hand he is holding some papers where we can read the first sentence of the novel. 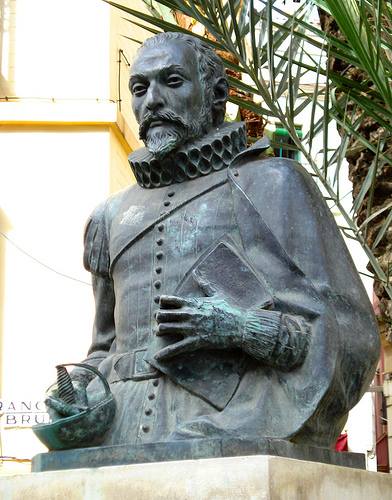 Don Quijote is not only a story of adventures, it is the story of a revolutionary who wants to make the world a better place. Notice that Cervantes was very clever when criticizing the country as he could skip the censorship by putting in the mouth of a crazy man all his opinions about the society he was living.

“To change the world, dear Sancho, is not madness nor utopia, but justice”

There are a lot of examples in the novel where we can enjoy the ideal world that Don Quijote was fighting for. In the chapter 22 of the first part, Don Quijote frees a row of prisoners sent to the galleys. In those times thousands of people, specially gypsies, were sent to the galleys by force and they boarded in several Andalusian ports towards America, Africa or the Indies, and they suffered extreme violence and lived in very poor conditions within the boats. The reasons given by the Knight of the Sorrowful Figure to release them were very powerful:

“That is a chain of galley slaves, on the way to the galleys by force of the king’s orders.”
“How by force?” asked Don Quixote; “is it possible that the king uses force against anyone?”
“I do not say that,” answered Sancho, “but that these are people condemned for their crimes to serve by force in the king’s galleys.”
“In fact,” replied Don Quixote, “however it may be, these people are going where they are taking them by force, and not of their own will.”
“Just so,” said Sancho.
“Then if so,” said Don Quixote, “here is a case for the exercise of my office, to put down force and to succour and help the wretched.”

The knowledge that Cervantes had about the country was also remarkable. He particularly knew very well Andalusia and its capital, Seville:

“On one occasion she made me go and challenge the famous giantess of Seville, La Giralda by name, who is as mighty and strong as if made of brass, and though never stirring from one spot, is the most restless and changeable woman in the world. I came, I saw, I conquered, and I made her stay quiet and behave herself, for nothing but north winds blew for more than a week.” Words by the Knight of the Wood to Don Quijote.

Don Quijote also helps us to learn about History. Not only about very important historical events like the expulsion of the Moorish people from the Iberian Peninsula, but also about very small details of our present traditions.

From the second part, chapter XXVI:

“Nay, nay,” said Don Quixote at this; “on that point of the bells Master Pedro is very inaccurate, for bells are not in use among the Moors; only atabales and a kind of dulzainas somewhat like our chirimías; to ring bells this way in Sansuena is unquestionably a great absurdity.”

Depending on the translated versions, atabales are kettledrums or small drums, and dulzainas and chirimías are flutes and clarinets or even clarins and trumpets.

In traditional celebrations all around the Spanish State, men play small drums and a flute, like for example in the Catholic pilgrimage of El Rocío. Could be this pair of instruments a Moorish remnant?

The expulsion of the Moorish people happened between the publishing of the first and second part of the novel, and it caused a huge impact in Cervantes. Some historians even say that maybe he was also a moorish. In the novel there are many morisco characters, but the most significant one is Ricote, a Sancho’s neighbor that come back incognito to the country after his expulsion. This scene has a lot to say about today’s inmigrant crisis.

Finally, I want to mention one of my favorite moments in the novels. The shepherdess Marcela is considered guilty of breaking a lot of men’s hearts in her town. Don Quijote decides to talk with her to change her behaviour, but he is received with her speech of freedom desires:

“According to what I have heard, true love is not divided and must be voluntary, not forced. If this is true, as I believe it is, why do you want to force me to surrender my will, obliged to do so simply because you say you love me? But if this is not true, then tell me: if the heaven that made me beautiful made me ugly instead, would it be fair for me to complain that none of you loved me? […] The limits of my desires are these mountains, and if they go beyond here, it is to contemplate the beauty of heaven and the steps whereby the soul travels to its first home.”

Don Quijote finally stands up for Marcela and says he will kill anyone who pursues her.

Last time I’ve been in La Mancha I was travelling with a group towards Madrid as a tour leader. When we were driving by Puerto Lápice and Consuegra we could see from the bus some of the famous and traditional wind mills that also appear in the novel. I searched on my cell phone the song “The impossible dream” sung by Elvis Presley and I explained to my group why Don Quijote is such a good story: incredible adventures, excellent sense of humor, critical perspective between the lines and a perfect historical description of the so called Golden Age of Spain. I would definitively recommend everybody to join Don Quijote and Sancho Panza in their journey… and fight the unbeatable foe.