Last summer I visited Granada again. This time I stayed at the rural house Fuente la Teja in the Natural Park of Sierra Nevada, just 25 minutes from the city of Granada. This house is located in the middle of the mountains where silence is the main character and that is what I was looking for. It was delicious to spend some afternoons having a relaxing bath in the small swimming pool and later sit down at the main front of our bungalow to eat some grapes with our Pilu.

Fuente la Teja is run by Ana and Paco, a married couple who after working hard a lot of years decided to start their own business away from the urban and stressful life. They are really nice people and they made us feel at home. The best thing for us is that Ana and Paco are fond of animals, there are dogs and horses in the rural house, so pets are very welcome and they do not apply any extra charges for them. We could meet some of the neighbors with four legs not only in the rural house but also while we were walking around the countryside. It is a perfect place for hiking as well.

In the mornings we used to visit some towns nearby. The rural house belongs to the municipality of Güejar Sierra, a small town who receives you with one of the best Andalusian poems from the 12th century.

Oh, people from Al-Andalus, how joyful you are!

Heaven is in your lands

If I could choose, this land will be my decision

Do not be afraid of Hell, because it is not possible

After being in Paradise.

The center of Guejar Sierra is extremely beautiful and, as it is said in the poem, water is one of the most important elements. We visit the town and I recommend to do the route of the old tram of Sierra Nevada , I think is the best route I’ve ever done. At the end Pilu only wanted to drink in every fountain we found, but she survived perfectly this long walk. As you can imagine we were starving when we finished the route, so we ate in the main square of Güejar Sierra where there were many bars and restaurants. We tried “choto”, kid meat stuffed with garlic, a traditional dish in Granada. The cook prepared an enormous plate and we thought it was going to be impossible to eat it up, but we did. It was delicious. We ate at Mesón Celia. 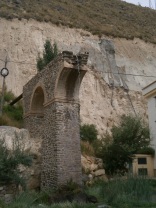 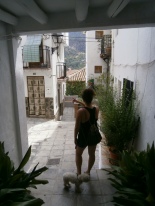 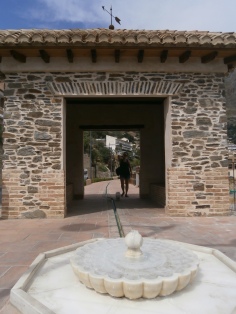 We also visited Pinos Genil. The river Genil crosses this town in a valley so it was a more relaxing walk than the previous one in Güejar Sierra as it is a flat area. The sound of the river gave a nice atmosphere to the place. We walked along the riverside and finally we ate some tapas in Casa Guillermo. 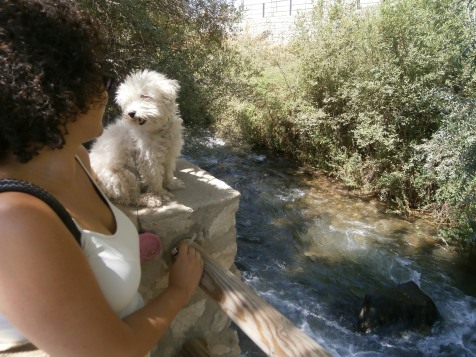 We also wanted to go to the a coastal town and we chose Salobreña. I think it was a good decision. This town is on the coast, but the city center is on a hill. The Old Town sits atop a rocky prominence and it is a cluster of whitewashed houses and quirky steep narrow streets leading up to a 15th-century castle, but its origin dates back from the 10th century. Walking to it is a little bit hard because of the slope, but the way is so beautiful that it well deserves the effort. And it is free to visit the castle, what else?

Pilu at the church. Yes, it is a church

Street of the flowers

Bell tower of the church 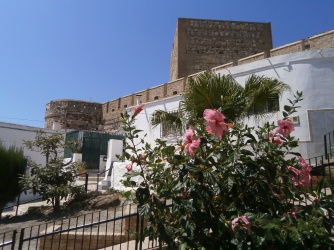 The castle from the street of the flowers 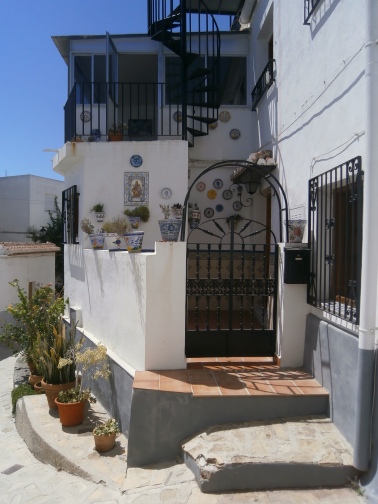 Views from the castle

Finally, when we left the rural house to go home, we stopped in the city of Granada. We have a friend there so we tried some tapas and drinks with him in Albaicin neighborhood. As I said in previous posts, Granada deserves more than its own entry on my blog. So, again, for now I will just upload a picture. In this one we are in the balcony of San Nicolas with the Alhambra behind.

I love this picture because even Pilu is laughing. 🙂

One thought on “Rural vacations in Fuente La Teja”